Gold prices have surged this month, passing $1,400 an ounce for the first time since 2013.

Gold is headed for its best week in three years with it set to close near $1,400 per ounce.

Sentiments in markets are bullish and it’s quite simple to state the reasons for the same.

Everything from dovish central banks, technical indicators, negative-yielding bonds and fears of a military strike between the US and Iran are all working in favour of higher bullion prices. 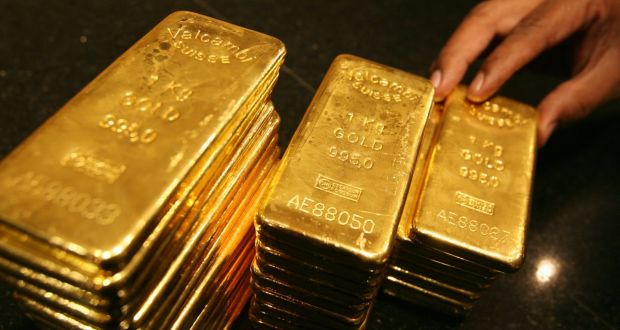 The best performing metal over the past 15 days was gold, up 4.26 per cent. Initially, gold traders and analysts were quite neutral on their price outlook for gold. They thought gold will remain more or less stabilised until it hit a five-year high this week and broke above $1,400 per ounce. Bullion got a huge boost after the Federal Reserve kept interested rates unchanged on Wednesday and signaled a readiness to cut rates due to increased economic uncertainties.

Another reason why gold is back in the limelight is because the investors are seeking havens amid slowing global growth due to the fallout from the U.S.-China trade dispute. Furthermore, central banks are globally adopting a more dovish tone.

Last week on Wednesday, the Fed left its key rate unchanged and it dropped a reference to being “patient” on borrowing costs and forecast a larger miss of their 2% inflation target this year. The greenback weakened to erase its 2019 gains while the yellow metal strengthened.

In the past week alone the price shot up almost 10 per cent, to $US1408.80 an ounce, with the depreciation of the Australian dollar pushing the price in local currency terms to record levels above $2000 an ounce.

The movement in the past week points to one of the factors driving the price. The 9.8 per cent spike appears to have been a direct response to last week’s US Federal Reserve Board’s meeting, which signaled likely cuts to US official interest rates later this year.

Gold prices rallied to six-year highs last week and continued posting gains on Monday at $1,403 per ounce. In the move to reduce its dependence on the dollar, China has been piling up its reserves, which has added to the precious metal’s resurgence.

The People’s Bank of China has purchased more than 70 tons of gold since December, according to the World Gold Council (WGC). Before that, the Chinese central bank had not reported an increase in gold reserves for more than two years, and the official figures remained unchanged from October 2016 to November 2018.

In fact, it’s not just China. Central banks generally have been diversifying their reserves away from US Treasuries. According to the World Gold Council they bought 145.5 tonnes of gold in the first quarter of this year, the most since 2013

President Trump might be starting a currency “war,” in addition to the ongoing trade war. After the European Central Bank (ECB) announced it was prepared to cut interest rates further below zero, Trump published a series of tweets accusing the bank of unfair competition. Trump has spoken of reigning in the dollar, which would likely be positive for the price of gold, as the two have historically had an inverse relationship.

President Trump’s threat to put tariffs on Mexican imports led to the gold price jumping in June. By linking tariffs to non-trade issues, Trump has increased the range of issues that could be complicated with tariffs and hence raised the level of uncertainty. Although the threat of tariffs lasted for only a week, gold held on to its gains.

The world’s two largest economies US and China have been involved in a trade conflict since March 2018. In the latest escalation, the US increased tariffs to 25 per cent on $200 billion worth of Chinese goods. China, in response, introduced duties of 25 per cent on 5,000 US products worth $60 billion.

The US-China the trade dispute is ongoing and the US is holding trade talks with Japan and the EU this year. In addition, the UK still has to leave the EU, so economic uncertainty looks likely to remain high, giving investors several reasons to look to gold as a safe haven.