GOLD RUSH: WILL THE RALLY CONTINUE?

Gold has enjoyed a meteoric rise this year, hitting a record in early August on the back of a weak dollar and continued Federal Reserve support. Negative U.S. real rates have stabilized and started to move higher in August, with gold moving lower as a result. The impact of real rates and the dollar are key drivers of gold prices, not equity investor sentiment, and with economic data continuing to show signs of a recovery, we would expect this rise in real rates to continue, as well as a general strengthening of the dollar — an additional headwind for gold.

The Fed pledged in September to hold its benchmark interest rate between zero and 0.25% until labor-market conditions reached a certain level and inflation was on track to moderately exceed its 2% target rate “for some time.” The fed-funds rate is below zero in real terms, which takes inflation into account. Real rates, however, stopped plunging after gold prices peaked in August, and the dollar “finally caught a bid,” adding that gold prices have fallen by nearly $200 since then.

Investors’ favourite way of buying gold this year has been through exchange-traded funds, which have added 862 tons of bullion. Total gold held by ETFs rose 34 percent this year to 110.9 million ounces as gold advanced 26 percent this year. 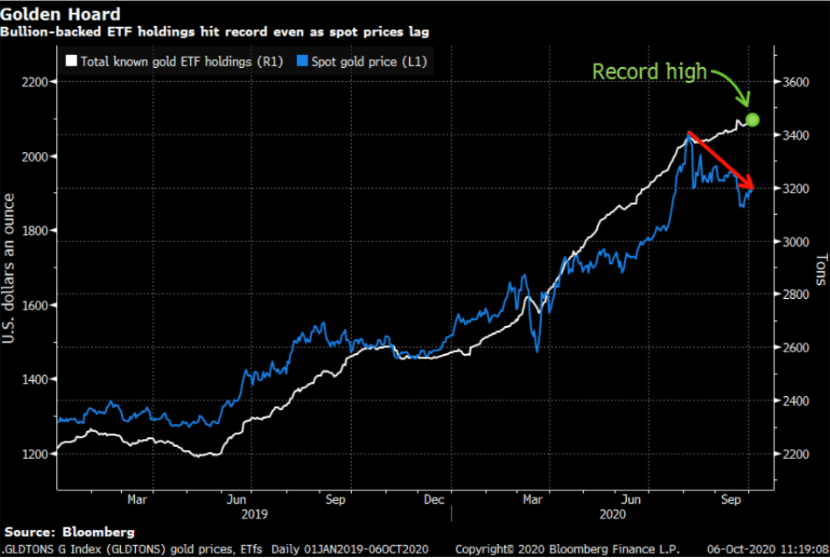 The demand coming out of the West has been spurred by the impact of the coronavirus and, more specifically, the idea of a path to endless money printing. In places like India and China, however, demand for gold has been relatively soft. Buyers in the two biggest consumer markets have either been selling their holdings or borrowing against them. The question then becomes whether or not retail consumption can continue to drive gold’s strength – and what would happen if demand from the West dries up all of a sudden. The last time demand dried up heavily in the West, gold plunged from $1920/oz. to $1200/oz. in 2013.

One tailwind is the fact that gold ETFs now make up 35% of global demand compared to just 8% a year ago. But inflows into these funds look as though they could be slowing.

A plunge in gold could trigger further selling by many of the same retail investors that have kept the commodity afloat. Gold is currently about 10% lower than its late summer highs. China and India account for more than half of global gold purchases, but demand has fallen 56% in India over the first half of the year. Demand has slowed, also as a result of pandemic-induced lockdowns. Weddings have been postponed and have reduced the appetite for lavish spending. China has seen a similar plunge in consumer demand. The country saw its lowest level of consumer demand since 2007 during the first half of this year at just 152.2 tons.